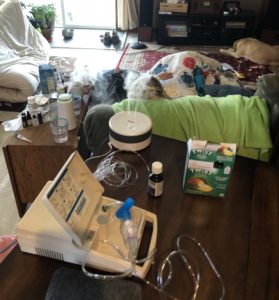 I am completely humbled.   I have always prided myself on my kids’ health; especially the fact that my younger one, 10 yo Leah, RARELY gets sick at all.  I can literally count on 1 hand the times I remember her being sick in her life and they were MILD.

But OMG, life has changed:  I am in the midst of the dreaded Flu.  She is on day 4 of being really sick.  And I am going a bit nuts.  I am grateful that my job allows me to be home with her, because Dad can’t and NO ONE else would risk exposure.  I DO want the control and want to be here to make sure she gets her fluids in and has essential oils rubbed on her chest every couple hours and to hold back her hair when she throws up.  But I admit, I hit a wall today.

Roller Coaster of Symptoms and Emotions

This illness has been a roller coaster, and 4 days feels like 2 weeks.  She started out with severe ear pain and high fevers.  For 2 days, she ran a fever of 102-104.8.  The ear pain was constant and unrelenting with very little we could do for it, but shower and hold a warm compress on it.  Essential oils and ibuprofen helped, but only mildly.  The past 2 days, the fever has dropped to a hover around 101.5, and the ear pain is mostly gone, but now she is coughing incessantly and threw up twice today. Not sure if this is due to the Flu, the Tamiflu or the coughing.

As the fever reduced, I fell under the mistaken assumption that we were headed out of the woods, but this was quickly replaced by worry that we would end up in the hospital due to dehydration.  She began throwing up today and will not drink without being force-fed.  I finally have had to tell her she will end up with an IV in the hospital if she does not sip on her water bottle and drink the electrolyte I give her.

Sunday night, I thought she was getting better, when, while watching a movie on the couch, she began tapping her hand on the couch in boredom and calling me my silly, adorable pet names, like Pinky Prom Queen.  ( don’t ask- she comes up with some amazing nick-names).  But lo and behold, Monday she woke with a 103 fever and lethargy that made it hard to get her to the bathroom.

Oh the roller-coaster!  My emotions have ranged from concern and slight fear to frustration that she won’t do as I say to get better to anger that EVERYTHING tastes awful (even jello!) ( as side effect of the medication).  That on top of the fact that I have barely left the house in 4 days.

So, what is the point of all this?

To tell you that no matter how healthy you think your family is, ANYTHING can happen.  To tell you that I am humbled by the power of illness.  To admit that I don’t have all the answers and that prevention is much easier than dealing with a major virus.  And to tell you that I have learned that illness needs a patient touch, which is hard for me.  It is a reminder that our society doesn’t deal well with illness that keeps us down for long.  We expect instant results, but even modern medicine can’t give us that.  Sometimes it is just wait, hydrate and see.  My 4 nurse friends have been there for me and keep reminding me of this.  Thank you to Jen, Corinne, Laura and Staci!!!

Scientists as well as doctors in the “alternative” medicine world and proponents of “natural” immunity, believe that childhood illness educates the immune system. It teaches the immune system how to fight, produces life-long antibody immunity and a “memory” of how to deal with a virus or bug the next time.  Many in the field go as far as to propose that one of the reasons for allergies, food sensitivities and even auto-immune disease is that our modern immune systems see so few battles, that the immune system has nothing to do.  Acting like a bored teenager, it reeks havoc on other systems, over-reacting and battling non-enemies.  This theory holds that lack of exposure to parasites, bacteria and viruses leaves an unoccupied immune system that goes rogue on “friendlies”.

There is also research showing that HAVING certain childhood illnesses, especially febrile ones prevents cancers later in life.

Overall, risk reduction increased with the frequency of infections, with febrile infections affording the greatest protection

So, as scary as some of these illnesses are, barring dehydration and the requisite ER trip, patience, fluids and time ( and appropriate medications when warranted) will leave their little bodies better for it in the long run.  At least that what I keep telling myself, while I wallow in the midst of fever, complaining and arguing not to shower so the steam will help her cough, and to drink the damn electrolyte even if it tastes like blood.

Go here, here, here and here to learn how I prevent illness.

Go here and here to learn how I deal with acute illness in my family.